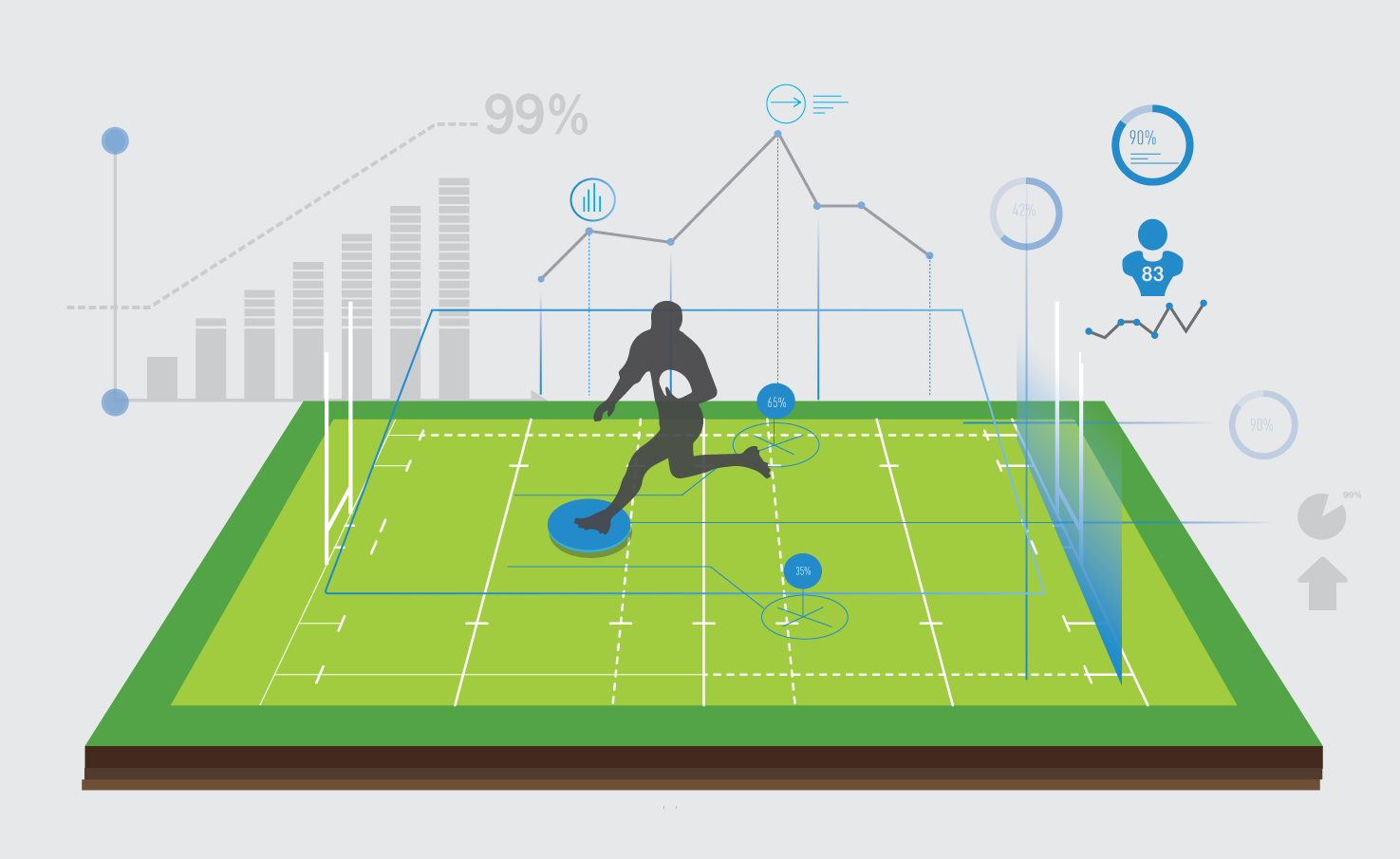 Last month we used predictive analytics and machine learning to predict the results of the Rugby World Cup, “out-money balling” the bookies themselves and placing us at the top 00.32% of humans on sports prediction site, SuperBru. Now that the dust has settled a bit after that fun initiative, I thought I’d look into other ways data analytics is being used in the sports world today. There are indeed many ways, but for the sake of brevity, let’s look at four of the more interesting ways that data analytics is changing the world of sports.

Our belief is that with the right data the right information can be derived that enables business leaders to make decisions that enhance business performance. In sports, more and more of that “right” data is becoming available thanks to wearable technology and RFID tags being worn by players.

Data collected, such as players’ vital stats and movements in training and in play on game day are being analysed to enhance player performance and match strategy. Coaches can now have access to information such as how fast players are running, the distance they are covering in a game,  and their levels of fatigue or dehydration in real-time and after a match.

This information is enabling coaches to identify weaker or stronger players, their physical state, and support their decisions when it comes to whom to replace during a match or whom to keep on the bench. And by studying patterns of play and player movements, coaches can reconfigure play strategy to make use of each player’s strengths and offset their weaknesses to improve overall team performance.  Over time, coaches can study the impact of data-driven decisions and strategies on the overall player and team performance by analysing the change in player data.

However, not only do coaches benefit but so do players and fans. Real-time access to players’ vital stats is helping players by notifying coaches of the risk of dehydration, exhaustion, or injury. For fans, information such as a player’s heart rate and how fast a player is running towards a goal compared to those running after him can be shared on the screen to enhance the spectator experience.

By analysing past behaviour of individuals and comparing that behaviour with aggregated behaviour of similar individuals, predictive analytics is able to provide fairly accurate predictions of future behaviour – regardless of whether it is the lifetime value of a customer or of a rugby or football player. In sports, recruiters or sports managers and coaches are using predictive analytics to determine which players to recruit or replace and how much to pay for them.

Analysis of a player’s performance data and comparison to data from similar players enables coaches or recruiters to determine the future performance of a player and thereby determine that player’s future value and the price they are willing to pay for that player. With player salaries in some sports being so high nowadays, recruitment is seen as an investment, so predictive analytics is being used to minimise risk and increase ROI.

3. Predicting an opponent’s next move

When it comes to sports, speed is of the essence. And the ability to anticipate an opponent’s next move and respond effectively is reliant on the speed at which the information is delivered to the player. Although still early days, predictive analytics has proven able to predict what a baseball pitcher is going to throw with a 74.5% degree of accuracy based on who is at-bat and the scenario on the field.

As much as we like to think we are unique, what data analytics has shown in terms of human behaviour is that there are patterns and trends in our behaviour, and as random as a play may seem in a match, chances are that that play has been done before and there are stats to prove it and stats that can be used to predict it again.  The challenge is feeding that information through to the player on the field in time.

The use of data analytics enables businesses to develop strategies that optimise business performance. So, to what extent is data analytics changing strategy in sports?

In baseball, analytics is changing match strategy and a team’s elective choices, or the options players have that opponents have little or no chance of preventing, e.g. in baseball, the intentional walk or the attempt to steal a base. These optional plays in baseball have shown through analytics to forfeit too much chance of a multi-run inning under most circumstances. As a result, the number of attempts to steal base per team per game in Major League Baseball fell by 30% from 1993 to 2013, the number of sacrifice hits also fell by 30 % and the number of intentional walks by 36%.

In summary, analytics benefits everyone in sports. Recruiters and coaches can use it to determine a player’s future performance, enabling them to determine whether to recruit or trade a player and – in some cases – how much to pay for the player.

Coaches use analytics to gain insights into a performance that will enhance training and match strategy, and improve overall team performance. Fans gain a better spectator experience as player performance stats are shared with them adding to the excitement during matches.

Players benefit from data insights that arm their coaches with the information that will lower the risk of dehydration, exhaustion, injury, and enhance overall performance.  And finally, of course, your bookies and people betting on sports, since gut-feel and experience at setting odds for a particular event are not as powerful as using objective data – as we were able to show during our “Man vs. Machine-Learning” initiative in which we used predictive analytics to predict with 91% accuracy the results of all of the 2015 Rugby World Cup matches.

Data analytics is indeed changing sports, but the challenge is always in deciding how much we allow technology to change it.

What we have begun to see is a shift from a reliance on anecdotal experience and gut-feel from players and coaches to a reliance on data science to enhance decision-making in strategy on and off the field. Ultimately, this sounds like a good thing.

However, how soon before we see players kitted out with receivers in their helmets that tell them their opponent’s next move? How will this impact the spirit of the game? Will it be both distracting and decrease the degree of autonomous decision-making of the player? Will the performance of a team be based on who has the strongest and most skilled players or who is best able to interpret data and implement data-driven decisions? Only time will tell. For now, data analytics provides insights and calls the odds, but the sporting field still provides the arena for exceptional players to astound and amaze.

Where To Learn Data Science Skills In South Africa

The 7 Logical Fallacies to avoid in Data Analysis